It had been quiet day so far, he thought as he pulled up to the former pizza joint to see Aunt Bea.

The old witch had opened the place years ago, no one knew back then.  Gray hair, flowing skirts, Lennon glasses, and healing crystals, everyone just pegged her as some aging flower child when she moved here. She made good pizza though. No one really believed she was a witch except for a few kids who listened to her stories. The ones she told when she’d sit outside the store like she was holding court, over her tall glasses of overly sweetened tea. No one understood the day she changed the sign of her shop. 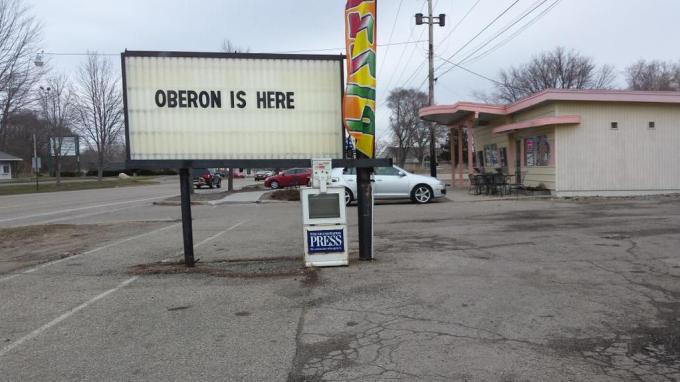 Soon after her “sisters” moved to town. After that the rumors started, then news reports, then the blackouts. No one wanted to believe, but now they had to. The Fey had returned to earth.

The hear Aunt Bea and her sisterhood tell it, those modern Wiccan types got it wrong. The root of witchcraft wasn’t so much the worship of nature or the fairies and their kind. The spells, the charms, the herbs all of it meant to placate the their king and to keep them sedated and pacified, safely away from our world. Centuries of inquisition, and witch trials decimated the keepers of that part of the lore. Time  and the frailty of human memory did the rest. When she would get in one of her moods she would mutter about blood. How girls these days were too squeamish about the blood. According to Bea, it always came to the blood sooner or later.

The news brought by the thin, steady trickle of refugees fleeing from the cities and towns sounded like mad tales, invented by trauma stricken minds. No one wanted to believe their stories of chaos and bloodshed. Now, Oberon led his armies across the world. They wanted their blood and would take it as they liked. Those who stood against them were cut down by ancient eldritch weaponry. Those who ran were left for the huntsmen, most every night you could hear their packs howling with savage glee.

When the fairy king finally turned his armies in their direction people on the outskirts of town took the worst of it. Even after hearing the horror stories of survivors, after Aunt Bea called for everyone to move to the center of town; some fools stood both in defiance and disbelief as waves of goblins and boogeymen were driven forward and over them by beautifully radiant men and women who rode upon gaunt specter like horses. Panic soon took over as bullets and weapons seemed to do little to stop the marching host. The Fey continued  forward, setting buildings ablaze, strange grey men in red coats would prowl the carnage feasting on the bone and blood, of both living and dead. People fled to the sisters, begging for help. The three women stood in the center of town, hands joined, eyes closed. At their feet was a brass bowl. It was filled with blood.

They lifted their heads and screamed.

The Fey screamed. They howled, as they piled up behind one another unable to stop their advance as they seemed to march into an invisible wall. They roared and shrieked as if they we burned. There was a great flash of light, then silence.

The brass bowl was empty. The Fey had retreated, vanished.

The lucky ones, who made it into the town were saved.

The sisters had picked that little town because back in the eighteen hundreds, right after the civil war a would be rail baron decided to make it his home, there was a silver mine, a boom, then a bust. After that there wasn’t much left to see. But, the old baron’s legacy remained a wide circle of railroad track, wrought iron was still there, buried under the streets and building foundations. The Fey found it nearly unbearable to cross such a line. The sisters workings kept them further at bay most days.  Aunt Bea says there’s more than likely others who found away to get by, to drive back some. Others who knew how to hurt them. One day we might find out for sure.

When they asked her where the armies were, where the nukes were. How did the government let this happen? Why didn’t the sisters do anything to stop it?

She tells them that their leaders were probably the first to go, replaced by changelings months before it all started, the sidhe aren’t stupid. The armies used lead and steel and fire, they weren’t any real use, not without iron and magic. Bea said, they should just count themselves grateful that Oberon is too stubborn and too bloodthirsty to use them; besides he wants this world for himself. And, as for doing something? What could be done, their warnings fell on deaf ears. Best could be done was saving who they could.

Not like things were about to change anytime soon. The old wood ovens still fired but they hadn’t produced a pizza in months. Now the days are filled with tending to little rooftop gardens or sneaking out of their small iron ring of safety to find food and other supplies. Their nights are spent huddled together telling old stories and, marking runes on rifle slugs or filling shotgun shells with shrapnel made from what scrap iron they could scrounge. In the space in between they tried to live.

As he reached for the door the old hand cranked siren on engine company number two began to moan it’s sad warning. Letting all know to prepare themselves. Fey had been spotted off to the east. He turned back to his car and drove to the clock tower to take his perch with the others. The rest of the afternoon would most likely spent looking through a rifle scope, waiting.

And it had been such a quiet day.

This was written for a Flash Fiction Challenge, hosted by Chuck Wendig at his blog Terribleminds. You can find some damn fine stories over there.