“You can’t say ‘if this didn’t happen then that would have happened’ because you don’t know everything that might have happened. You might think something’d be good, but for all you know it could have turned out horrible. You can’t say ‘If only I’d…’ because you could be wishing for anything. The point is you’ll never know. You’ve gone past. So there’s no use thinking about it. So I don’t.”

From the novel Lords and Ladies by, Terry Pratchett (1992)

I’m not a big person on living with regret. This is not to say that I don’t have a few but I do my best not to dwell on them. Reflection is all well and good as is learning from the past, but I won’t  sit there wondering about what ifs. That way leads to damnation, sorrow, madness and most likely binge drinking.

That simply will not do.

In my personal life I am known to unabashedly speak with all honesty about my perceptions of things, I try to do it in an entertaining way. Sometimes of the time it is well received, sometimes it is mistaken for good-natured ribbing, a lot of times in my life I have come off looking like a mean-spirited, or bitter jack ass. These are the risks I take every time I open my mouth.

Once you say something or take a course of action that is it, you own that now, forever. If it wound up hurting others then you can apologize and try to make amends for it, but it’s still out there in the world. Life has no take backs or mulligans you have to keep marching forward living with yourself.

I have had quite a few bad episodes in my life. Fall, is a series of pieces that describe the aftermath of one of those episodes. It’s still a work in progress but another installment looms on the horizon1

Once, while extremely drunk2, I proposed marriage to a woman who I had only known for two weeks. She drunkenly accepted.  Two drunken fools both too stubborn to admit that what we had just agreed to was a very ill-conceived idea based on all evidence. The next day neither of us would be the one tho say it was a mistake. We lived together, engaged for two years before we really did anything about it.

In less than two weeks we will have been married for eleven years.

Seems a unintended consequence of being that stubborn was that we spent enough time together to actually fall in love. So admittedly sometimes potentially bad decisions can work out in our favor. We have had our share of troubles but I sincerely doubt I would be as happy without her.

As I side note I chose a quote from Terry Pratchett this week because, not only is he my favorite author, his latest installment of the Discworld series is released in the U.S. on the 18th of March. I am looking forward to it becoming the first book I’ve read in its entirety since I quit drinking3

Terry Pratchett’s Discworld is quite possibly my favorite series of books. Pratchett’s satirical style is superbly draped across the backdrop of an anything-but-ordinary fantasy world. One of the more refreshing things about this as opposed to other long running series is, in my opinion, the ability for a new reader to be able to pick any of the books practically at random and not feel like he had missed anything to the point of being lost; the books are so much more connected by characters and setting than they are by a timeline of events, and though there is a bit of developed background to some stories the author does a wonderful job of  filling in the need-to-know in a quick, entertaining and plausible way.

Recently, I opted to post a quote from one of the earlier books on this blog in the interest of trying something new. The character whose line it is, the ruler of the City of Ankh-Morpork, quickly became one of my favorites in the series. I would sincerely doubt that one might find in fiction or reality a politician so honest and pragmatic as Havelock Vetinari, from. His approach to matters of state are humorous largely because how elegantly simple his solutions are.His rule embodies  many of the principles of  “benevolent dictatorship” but, he is not the lest bit squeamish about making hard examples in cases where it is required.When faced with the ordinary problem of what to about rampant crime, he put the criminals in charge of policing themselves; once the cities criminal leaders got everything nice and organized he let them know, politely and in no uncertain terms, that he was well acquainted with all of their personal affairs. This unique arrangement (which you will have to read the books to fully appreciate) is a cornerstone in the foundation of life in the fair city which he oversees. 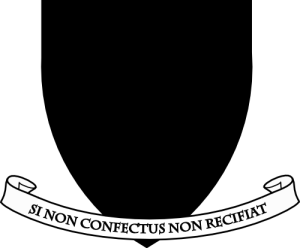 Despite an obviously, deserved reputation for being a ruthless, manipulative, and intimidating tyrant Vetinari truly cares about the city and it’s citizens. What he knows about his people is, that regardless of what they might cry out for (equality, justice etc.) what most of them really crave is to feel safe in the knowledge that tomorrow is going to be the same as yesterday. This is a lesson he may have learned while studying his own family coat of arms.

He is greatly aware of the psychological  gears and levers that drive human nature and makes great use of the carrot-and-stick method of leadership. His rule is also largely effective due to a policy of thinly veiled threats to motivate civic leaders to sort out their own problems. When that fails he does have his methods, a favorite of mine is forbidding the city watch to get involved in the matter.

Lord Vetinari is a character that is able to find the order in an apparently mad world. His style of governance is applaudable in his policies of just letting people get on with their lives and only intervening when they insist on things being done the hard way; or as Pratchett writes in his novel Sourcery:

“He didn’t administer a reign of terror, just the occasional light shower.”

“I believe you find life such a problem because you think there are the good people and the bad people. You’re wrong, of course. There are, always and only, the bad people, but some of them are on opposite sides.”

From the novel Guards, Guards by, Terry Pratchett